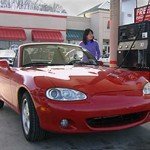 WASHINGTON – The U.S. Environmental Protection Agency (EPA) and the Department of Energy (DOE) today released the 2015 Fuel Economy Guide, providing consumers with a valuable resource to help them choose the most fuel-efficient and low greenhouse gas emitting vehicles that meet their needs.

In comparison to previous years, the 2015 models include a greater number of fuel efficient and low-emission vehicles in a broader variety of classes and sizes.

“Automakers’ innovation is thriving, and Americans are benefiting from new consumer choices that limit carbon emissions and slow the effects of climate change,” said EPA Administrator Gina McCarthy. “This year’s guide is not just about how the latest models compare with one another; it’s about providing people with an excellent tool so that they can make informed decisions affecting their pocketbooks and the planet.”

“Today’s announcement builds on the Administration’s commitment to developing a transportation sector that minimizes harmful emissions and saves consumers’ money at the pump,” said Energy Secretary Ernest Moniz. “This year’s guide provides the American people with user-friendly information for making the best decisions for their pocketbooks, while also helping create a more sustainable energy future.”

The guide provides “best-in-class” lists to help consumers find the most fuel-efficient advanced-technology vehicles as well as the most efficient gasoline- and diesel-powered vehicles. The best-in-class lists include multiple market segments, from two-seaters to large pickup trucks.

Consumers will find a broad range of information that can be helpful while shopping for a new vehicle — including an estimated annual fuel cost for each vehicle. The estimate is based on the vehicle’s miles per gallon (mpg) rating and national estimates for fuel prices. The online version of the guide, available through www.fueleconomy.gov, gives consumers a personalized fuel cost estimate based on local gasoline prices and their personal driving habits. The guide includes a greenhouse gas rating (from one to 10) for each model, giving consumers a quick way to identify vehicles with low greenhouse gas emissions.

Under President Obama’s Climate Action Plan, EPA and the National Highway Traffic Safety Administration established national car program standards for model years 2012-2025. These standards are projected to cut 6 billion metric tons of greenhouse gas over the lifetimes of the vehicles sold, save families more than $1.7 trillion in fuel costs, and reduce America’s dependence on oil by more than 2 million barrels per day. So far, automakers’ overall greenhouse gas and fuel economy performance was, on average, ahead of what the standards require.

For tips on more fuel efficient driving, check out the gas mileage tips at http://fueleconomy.gov/feg/drive.shtml.

More information, including a complete version of the guide and details on fuel economy labels, are available at http://www.fueleconomy.gov/ and at http://fueleconomy.gov/m/ for mobile devices. EPA and DOE will update the guide online as more 2015 vehicles become available.